What is Umrah ? The Islamic pilgrimage Explained

Islam’s oldest and mostly visited  Holy site, Makkah & Madina located in Saudi Arabia, is an important location for Muslims all around the world.

This is where the Holy book of Islam The Quran is revealed to the Prophet Muhammad (Peace be upon him).

The Umrah is an Islamic pilgrimage to Mecca performed by Many Muslims that can be undertaken at any time of the year in between Muharram to Ramzan, in contrast to the Ḥajj, which has specific dates in the Islamic lunar calendar; in the month of Dhu al-Hijjah. In Arabic, Umrah means “to visit a populated place” In the Sharia, Umrah means to perform Tawaf around the Ka‘bah and Sa’i between Safa and Marwah. This both should only be done after assuming Ihram (a sacred state). Ihram must be observed once traveling by the land and passing through a Miqat like Zu ‘l-Hulafa, Juhfa, Qarnu ‘l-Manāzil, Yalamlam, Zāt-i-‘Irq, Ibrahīm Mursīa, or a place in al-Hill.

Different conditions exist for air travelers, who must observe Ihram once entering a specific hodood of the city of Mecca. It is sometimes called the ‘minor pilgrimage’ or ‘lesser pilgrimage’. The Umrah is not compulsory but highly recommended.

Differences between the Hajj and Umrah

The literal meaning of Ihram is to make haraam (forbidden). When a haji pronounces the Niyyah (intention) of Umrah and utters Talbiyah, certain halaal (permissible) things become haraam for him. 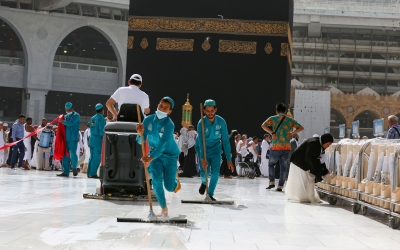 As Saudi Arabia issues a temporary ban on Umrah pilgrimages to the holy cities of Makkah and Madina for Saudi citizens and the kingdom’s residents due to concerns over coronavirus, Middle East Eye explains what the lesser known pilgrimage is all about.

Umrah is the name given to a pilgrimage  Makkah, a shorter version of  annual Hajj gathering. The word “Umrah” in Arabic means “visiting a populated place”.

Umrah offers an opportunity for Muslims to refresh their faith, seek forgiveness & pray for their needs. One who performs it is said to be cleansed of their all sins.

What are the main differences between Umrah and Hajj?

Umrah is voluntary but Hajj is compulsory for those who are physically well and financially can afford it.

Hajj is one of Islam’s five pillars, and Muslims who are able to, must perform it at least once in their lifetime.

Umrah can be performed throughout the year, but Hajj is performed only at a specific time,The last month in the Islamic lunar calendar between the 8th and the 13th of Dhul Hijah.

Umrah is almost a spiritual “quick-fix” and can be completed in under two hours, depending on how busy it is. Hajj is a more intense experience over several days.

Hajj is one of the largest annual gatherings of people in the world, with more than two million pilgrims visited each year from around 188 countries. Umrah, which is known as the “smaller” pilgrimage, might be performed by several million pilgrims each year, most probably due to it being cheaper and quicker to complete.

The focal point for both pilgrimages is the Kaaba, the black boxed structure located in Makkah’s large mosque complex known as Masjid al-Haraam. It is also in the direction of the Kaaba that Muslims face when offering their five times daily prayers, wherever they are in the world.

Both Umrah and Hajj share the same set of core devotional acts, although there is a more extensive set of rituals expected during Hajj.

How can pilgrims travel to Umrah?

Worshipers from outside Saudi Arabia usually travel in by Plane and need to apply for a special Umrah visa that is valid for a month. They must also have a meningitis vaccination, along with the right paperwork to prove it.

Travellers from neighbouring countries may cross borders by Bus/car, but will also need a visa.

For Saudis and those already living and working within the country, no special documentation is needed.

Muslims of any age can perform Umrah and Hajj, and there are no restrictions on how many times someone can make the journey in their lifetime.

But women under the age of 45 must be accompanied by a mahram, a male family member or relative,Mahram Should be above the age of 20. Women over 45 Years are permitted to travel with tour groups, without the need of a mahram.

Surrounding the Masjid al-Haraam complex are a range of hotels – from budget-friendly to seven-star establishments.

For those staying further away, most hotels offer a free shuttle bus service to the holy site, anticipating the arrival of pilgrims.

When can pilgrims go on Umrah?

It can be performed at any time of the year, apart from the days when Hajj takes place.

Most pilgrims go during the holy month of Ramadan, or in the two Islamic lunar months leading up to it, Rajab and Sha’ban, which are also considered to be sacred.

Muslims believe that there is increased mercy and acceptance of prayers during these holy months, when there is also a greater reward for acts of worship.

Are there any rules during Umrah?

A pilgrim has to be in a state of Ihraam, which derives from the Arabic word harama, which means forbidden.

The naming reflects the belief that pilgrims, during Umrah (and Hajj) need to enter a spiritual state of almost human perfection. There can be no quarrelling, cursing or bad language. No animal can be harmed – even the killing of an insect will break the state of Ihraam and nullify Umrah.

Pilgrims cannot cut, shave or pluck any hair, cut their nails, wear make-up or perfume or use any additional products. To do any of these would invalidate Ihraam according to Islamic jurisprudence.

The next step is to recite their intention to go on Umrah aloud. This is usually done when an individual reaches the Meeqat (entry points to Makkah marking the start of observing the Ihraam). The pilgrims then offer a prayer and must stick to the rules above until they complete their pilgrimage.

What do people wear during Umrah?

Ihraam also dictates what pilgrims wear. It symbolises the equality of all of mankind before God. It signifies that no gender, nationality, or status can make one person superior to another.

For footwear, men wear Slippers and must keep their head uncovered.

Women can wear any long, loose-fitting garment that is simply designed. Many opt for a plain black abaya – a long-sleeved loose dress that covers the entire body – and a simple hijab, or head covering. The face cannot be covered.

How do you perform Umrah?

(i) Recite your intentions: While walking towards the Kaaba, pilgrims follow the practice of Islam’s Prophet Muhammad, and recite the Talbiya, announcing their arrival and stating the oneness of God.

Upon entering Masjid al-Haraam, the mosque-complex housing the Kaaba, pilgrims enter with their right foot and make a supplication, asking God for his mercy and forgiveness.

(ii) Undertake tawaaf: The pilgrims circle the Kaaba seven times in an anti-clockwise direction in deep prayer. It starts at the Kaaba’s eastern point where the Black Stone is located, which is said to date back to the time of Adam and Eve, and is highly revered by Muslims.

Tawaf can take 20 minutes when the mosque is not busy, but much longer when it is, and pilgrims may have to circulate around the upper balcony floors of the Haraam also.

The purpose is to show devotion to God and demonstrate the unity between worshipers.

(iii) Pray: Pilgrims pray and recite verses from the Quran at the Maqam Ibrahim – The Place of Abraham – a few metres away from the Kaaba. They then go to a water-point to drink zamzam, considered to be holy water.

Just a few minutes walk away from the Kaaba are Mount Safa and Mount Marwa, where Muslims recite prayers walking back and forth between the two mountains, seven times. The total distance covered is two miles and the time it takes to complete depends on the pilgrim’s ability and fitness.

The act of sa’ii honours the Quranic story of Haajara, the wife of Prophet Ibrahim Peace be upon him) (or Abraham from the Bible), who is said to have wandered tirelessly between the mountains of Safa and Marwa in search of water for her infant son Prophet Ismail Peace be upon him) (Ishmael), in a barren desert.

Following the completion of sa’ii, pilgrims then offer a final prayer.

(v) Taqsir: Many male pilgrims then undergo taqsir, which is known as the shortening of hair, in one of the many barber shops surround the area of Masjid al-Haraam.

Shaving the head is regarded as symbolising rebirth and the completion of [ending] their pilgrimage. Female pilgrims cut a small amount of their hair, equal to the length of a fingertip.

This last point marks the end of the Umrah & Pilgrims are no longer required to adhere to regulations of Ihram.